It sounds ludicrous doesn’t it?   Why would anyone accept a negative yield on a bond when it would literally be better to put under the mattress?  You would have to pay the issuer to just hold your money. Furthermore, what does it mean to us?

About 25% of the government bonds in the world are now showing negative yields.  That’s like US$13 trillion says Bloomberg.  The remainder show extremely low bond yields, like Canada at 1.2% or the U.S. at 1.5%.

Here’s how they work.  For a negative bond yield to happen, the bonds are issued at a premium, in other words more than its $100 face value.  The bond does pay a positive coupon (interest rate) but over the term of the bond, even if the interest is paid you have still lost money.  Look at it this way, if we gave you $110 and you were to give us back $100 in a year, even if you paid us a $5 coupon for the year, we’re still down 5% for the year.  A negative yield.  Again, sounds nuts.  Why would anyone do that?

There are several reasons, including;

Why the drive to low yields?

In view of the chart below, you can see that in every country the dividend yield from stocks far outpaces the bond yields. 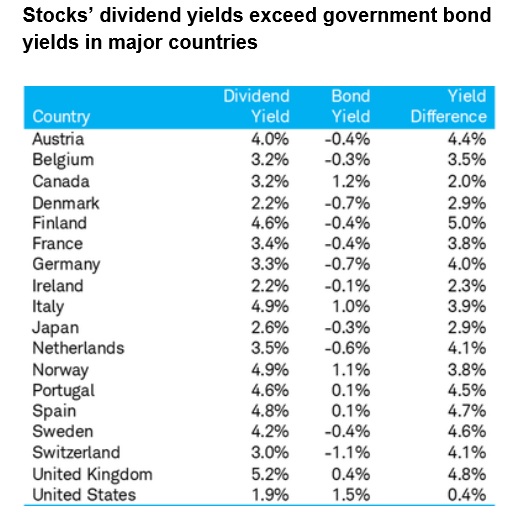 In what is currently viewed as a slowing global economy, low or negative yielding debt encourages investment into equity markets rather that the bond markets to stimulate growth, keep jobs, etc.   In other words, the negative yield is one way the government is trying to encourage you to look elsewhere with your investment dollars.  Which looks better?  An investment in Royal Bank with a dividend of 4% or an investment in a 10 year Government of Canada bond at 1.2%.  Once you factor in the tax efficiencies of dividend income, a “Royal Bank” looks pretty compelling.

What does this mean to you?

In as much as the global economy is indeed slowing and at some point, we will face recessionary pressures, for the next while, low bond yields should eventually have the effect of stimulating growth in terms of share prices.  We’ve already seen that so far this year in North America with equity markets bumping up against all time highs almost daily.

However, as we all know, a tree doesn’t grow to the sky and since the equity markets have been good to us this year, taking some profits off the table, which is a process we are now undertaking, is likely a prudent thing to do. Rebalance, become a bit more conservative and drive on.