With the recent Market Volatility we wanted to send out a quick note.

While there are worries in the economy, the fundamentals are still strong. Unemployment in the US is now 3.7%, the lowest since 1976 and this month showed a growth in jobs of 134,000.  Worries - such as trade tariffs and increasing interest rates are valid, and while they will temper the growth, we don't believe they are rolling the economy over at this point in time.

Keep in mind too that September and the first part of October are historically the worst months of the year for equities. Sell now and head for the hills?

We don't think so at this point.

History would also suggest that investors can profit from dips in the market such as the one we just experienced. The illustration below highlights buying on a 5%, 10% 15%, and 20% dip. The 3 scenarios outlined below are for; 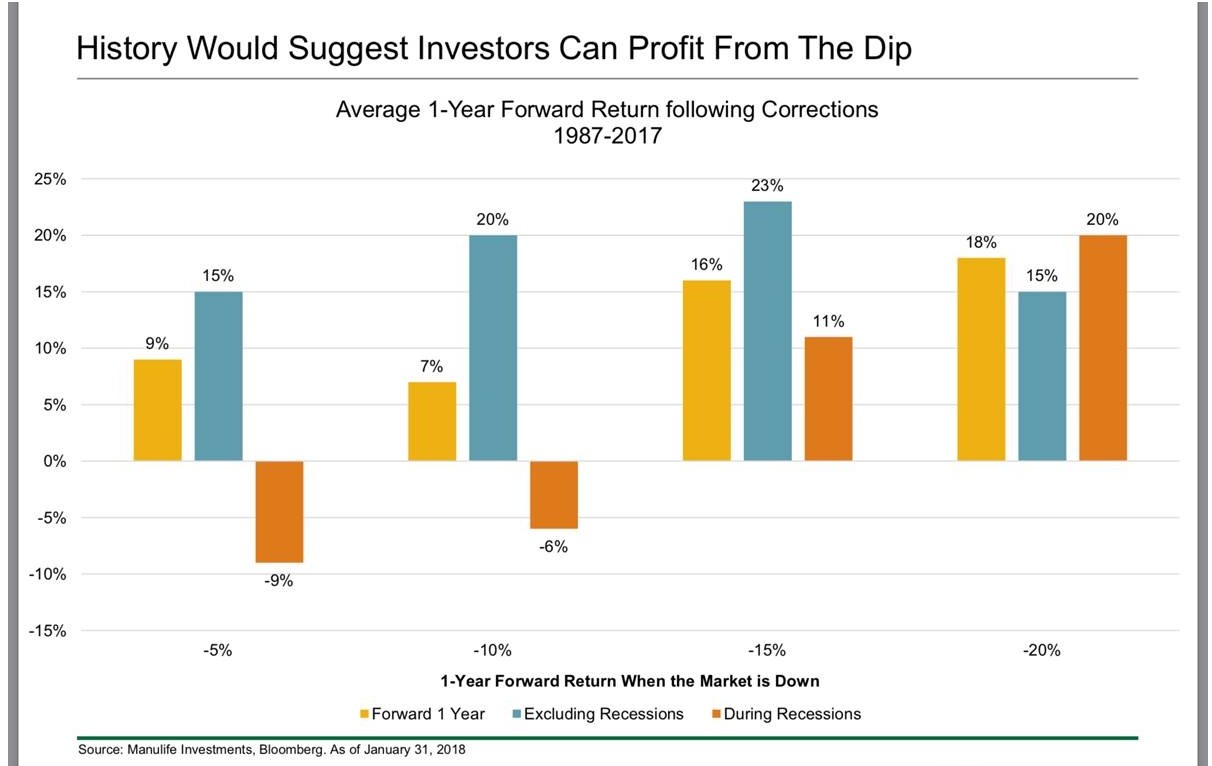 Essentially what we just saw was a textbook selloff like we saw at the end of January. As we know, when bond yields move higher, the equity risk premium diminishes and valuations take a hit. In addition borrowing costs become higher which could impact a company's ability to generate earnings by borrowing. What we have seen recently is an increase in the 10 year bond yields since August from a low of about 1.8% to about 3.25% in the first week of October.

Why did the equity selloff happen last week? There were 5 straight days of negative returns so maybe just a rush for the exits for fear of more. It did also coincide with the 10 year peak in the S&P 500. From a technical perspective the S&P 500 breached its 50-day moving average which may have sparked additional selling pressure. On the plus side from the techicals, (specifically the RSI)  the S&P 500 is now showing as being far oversold, hence the turnaround at time of writing.

One further note is that election years in the U.S. both mid-term and full election cycles are usually marked by elevated volatility and some of the spikes that we have seen in 2018 are bearing that historic trend out. That said, according to the Manulife Asset Management U.S. Core Value Equity Team, there is nothing in the US domestic market that would suggest a bear market is imminent and therefore what we saw last week was a healthy pause for a structurally sound US equity market.

It's like riding in an old beat up car. The ride may be rough and bumpy but it will eventually get you there.