Recessions do not occur very often, which is a good thing. They are defined by two consecutive quarters of negative GDP. It hasn't happened for a long time. Canada has experienced a total of five recessions since 1970 and twelve since 1929. Recessions usually last between three to nine months; the most recent, the 2008–09 recession, lasted seven months. All recessions in Canada since 1970 occurred at the same time as the economy of the United States experienced a recession, showing that the two economies are highly synchronized. The Canadian economy is more so sensitive to activity in natural resources such as oil and gas, mining, and lumber.

At this time, we believe that the probability of Canada going into a recession has increased. Some of the leading indicators are in place. Slowing auto sales, retail sales, housing, oil prices, interest rate pressure, each have been contributing to a weaker outlook and greater risk of recession in Canada in 2019.

Given the relative strength of the US economy, it is also our opinion this time that Canada will precede the US into recession. The timing of a possible US recession at this time is still hard to determine and not immediate.

The tools that governments can use to encourage growth and an emersion from a recession are overnight interest rates, monetary policy and bond repurchase programs. These are all meant to incent borrowing and therefore growth. A problem we have here in Canada vs the US is the level of household debt. As you can see in the chart below, since 2008 “a date that will live in infamy” there has been a vast divergence household debt between Canada and the US. The effect of this is that the Americans are in a much better position to borrow to invest and build than we are here in Canada. Simply put, Canadians are living way beyond their means. 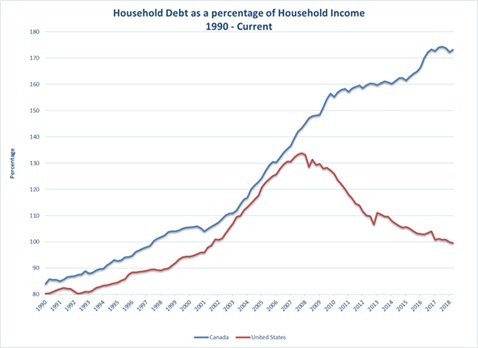 How Businesses Respond to Recession

There can be some positive outcomes to recessions. They can encourage firms to focus on productivity and the quality of their product to better compete. They can also encourage businesses to look for new markets to keep their companies profitable. Recessions can encourage the creation of small entrepreneurial firms that can compete with lower costs and innovations.

They can force larger companies to examine the scale of their operations and how they are managed. Some defensive companies, which remain stable during shifts in the business cycle, perform better than others during a recession. These include food producers and discount retailers — companies with products that are in stable demand. Nevertheless, overall declines in production and incomes coupled with higher unemployment make recessions a challenging time for most.

Economists and the government try to find some measures of the activity in the economy that can predict whether a recession may be about to occur. In other words, leading indicators. Examples can include a combination of sharp drops in the stock market, declines in retail sales or the level of inventories held by business, and a sharp fall in the prices of homes. Similarly, there are measures of activity in the economy, known as lagging indicators, which confirm a recession has occurred. These include declines in real GDP, wages and incomes, deteriorating employment and rising interest rates.

How are We Responding to This?

As a possible recession approaches, Canadian growth is reduced, for a while. This would suggest a reallocation of assets both internationally and sectorially.  Our stance is to move growth assets, especially Canadian, into more defensive assets in both equities and fixed income. Two thoughts that we have mentioned before are infrastructure on the equity side, and notes on fixed income.

Possibly the most boring of equities, it makes sense in a negative equity market environment. The reason is that large infrastructure projects tend to continue through recessions is that people still have to pay, regardless of the economic environment. Toll roads, airports, pipelines, utilities. All boring but still necessary even in the darkest moments of the economy.

A fixed income asset with the same credit rating as the issuer which is normally a bank. CIBC, Scotia, BMO and the like. These are not entirely without risk but they do offer downside protection with coupon payments that are very attractive. As an example scenario, please refer back to a previous blog of ours.

If you are eager to implement some defensive strategies, or if you would like to discuss or talk about your portfolio specifically, let us know.