“Give me a one-armed economist” – Harry Truman

As we do each year Zoe and I attend the forecast breakfast hosted by the Economic Club of Canada. This year virtually. They entertain a panel of Chief Economists, one from each of the six chartered banks. It always makes for an interesting breakfast as they seldom agree. This year, oddly, there seems to be a consensus among them, largely around the end of the COVID trade of 2020 and the beginning of the year of consumer spending in 2021.

Harry Truman hated economists. His beef was that they would always say “Well on the one hand…..but on the other hand…..” Hence the need for a one-armed economist. This year Mr. Truman would be happy with each of these bank economists.

During the past year we have all been stuck at home. Primarily, not spending money. As a result, the savings rate in both Canada and the US has skyrocketed. None of us has been spending money on travel, going to a movie or restaurant, updating our wardrobe, going to a hockey game, etc. There is pent up demand. When we begin to emerge from the pandemic, and we have reached the critical mass of vaccinations the world will start spending with vigor and as such it will create opportunity for investment. Some companies which have suffered will revive but there will be a cost and that cost is inflation. If demand spikes and outstrips supply, prices rise and with a rise in inflation, interest rates will no doubt follow. This, according to The Economist will be a short-term event which would subdue when people’s appetite for consumption reverts to normal.

There is lots of evidence to support this notion. For one, as we know house sales in North America have escalated over the last year. That is sales of existing and new build houses. Housing is an engine for consumption. As anyone who has bought a house knows, when you buy a house and move in you become a spending machine for a period of about a year. Not only that but new builds require materials (read commodities) which was one of the main success stories of 2020. Lumber, copper, steel. All of these, along with most other commodities, barring oil are at record high levels.

There is also evidence the buying spree has already begun. Two measures support the idea. One, we have talked about many times before. The Purchasing Managers Index or PMI. That is a polling of those responsible for buying the inventory to manufacture the products to satisfy the sales levels. A value under 50 means lower demand which will eventually negatively impact equities. Over 50 is will positively impact equities. In December, the value in both Canada and the US was 57.

A second indicator which we have not mentioned before but constantly track is the KOSPI. The South Korea Composite Stock Price Index. South Korea is a manufacturing economy. Mobile phones, consumer electronics, household white goods meaning major appliances. Air conditioners, refrigerators, stoves, water heaters, microwaves and the like. Of course to manufacture all this they are net importers of commodities like iron ore, coal and copper. At time of writing, January 7, 2021 the KOSPI hit an all time high, with momentum. This is a leading indicator of economic growth and prosperity.

Our friends at Manulife Investment Management have provided the following. Historically when in an environment of positive growth and positive inflation markets have responded as shown below. 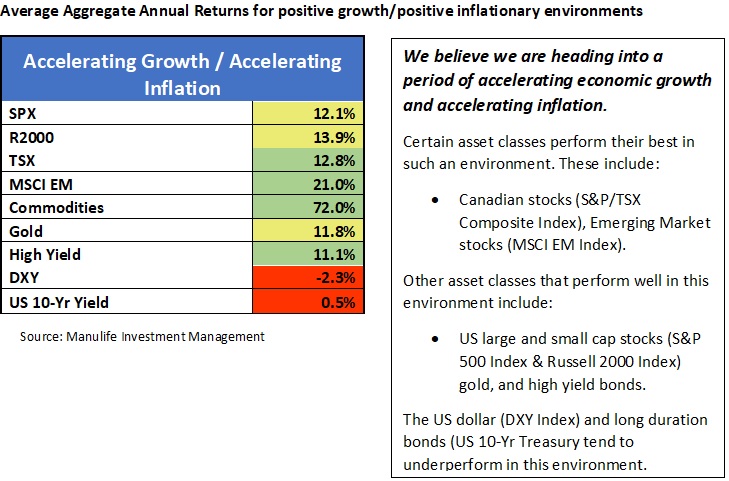 Nothing is a certainty. But we can take a positive view of 2021 keeping the above information in mind. Vaccines are rolling out to the extent that we may be able to travel in late 2021 to early 2022. The Covid numbers may be higher now, but they won’t be high forever. The end is in sight and we have 6 one armed men signaling a positive economic light at the end of this very long tunnel.

Stay safe everyone and as always if you want to chat we’re here.